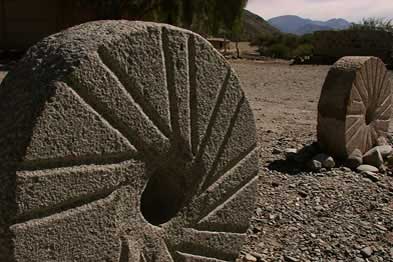 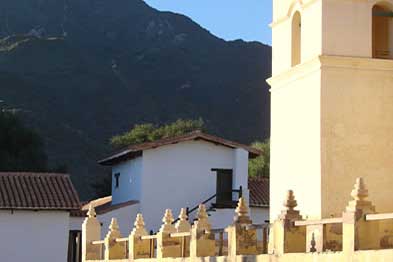 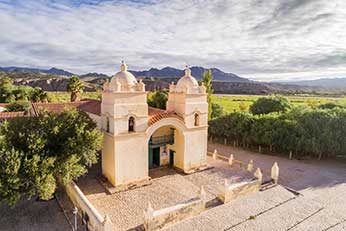 These lands were inhabited by the people of Tiahuanaco, who built their irrigation systems and honored their gods through the Puerta del Sol Sun Gate), in Bolivia. The Incas or Quechuas struck a deal of sovereignty with the inhabitants of the Calchaquí Valley. The Inca Road, a military road and a means of cultural transmission, descended from the Puna through the Potrero de Payogasta to the north of the Calchaqui territory until it finally reached Molinos to access Chile through Luracatao, Catamarca through Santa Maria and Tucuman through Tafi.

Molinos Valley is one of the pre-Hispanic places which still reflects, through its silence and mountains, part of the history of our country and is connected with the origins of the Spanish conquest and colonization in the Argentine territory.

Hacienda de Molinos was entrusted to General Diego Diez Gómez in the second half of the 17th century in return for the services rendered for Spain. Later on, it became his daughter’s (Magdalena Diez Gómez) and his son-in-law’s (General Domingo de Isasi Isasmendi) residence. When Isasi Isasmendi died in 1767, the hacienda was inherited by his eldest son Don Nicolás Severo de Isasmendi and Echalar, the last realist governor of Salta.

Unlike other towns in the Calchaquí Valleys—which have a religious origin and were built around the parochial church—Molinos was created and developed around the Calchaquí Hacienda of San Pedro Nolasco de los Molinos and also came to depend upon it.

Therefore, the town’s layout differs from the typical colonial layout, where the church is situated opposite the main park, with traditional squares and narrow streets.

In Molinos, the old part of town is located close to the Hacienda de Molinos. The church, considered as National Historical Monument, is right opposite the hotel.

Pre-purchase your holidays before the end of this year and receive 50% of what you have spent to use within Argentina in 2022.

Have you checked our special discounts?

We have special discounts for 2021 summer, and other promotions.